Slater and Gordon has commenced proceedings against CBA for selling “junk” insurance policies. If you paid for insurance on a current or former CBA credit card or personal loan, you may be eligible to participate in the CBA Class Action and get your insurance premiums back. 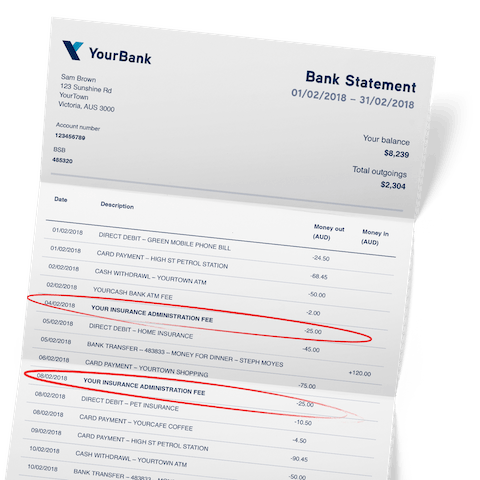 On 13 November 2020, the Federal Court of Australia ordered that a notice be sent to all persons who were sold and had paid premiums on either of two types of ‘consumer credit insurance’ policies, called CreditCard Plus and Personal Loan Protection insurance and may be group members in this class action (Opt Out and Commencement Notice).

You may be a potential group member if you are or were a policy holder that has not been refunded in full for the premium paid for these consumer credit insurance policies or have not successfully claimed more than the total amount of premiums paid.

If you have received the Opt Out and Commencement Notice and you would like to register your interest in the class action, please click below:

Slater and Gordon have recently settled a similar case against NAB for $49.5 million, providing compensation to NAB customers who purchased worthless CCI. As with NAB, the CBA Class Action is being run on a no win, no fee basis and without a litigation funder.

The CBA CCI Class Action is part of a series of cases following the Banking Royal Commission, which heard that banks were using pressure tactics to sell unnecessary CCI products to customers who were ineligible to claim under the policies.

We allege that CBA and its insurer, Colonial Mutual Life Assurance Society Limited (Colonial), engaged in unconscionable and misleading and deceptive conduct by selling worthless insurance products to their customers.

What is the CBA CCI Class Action about?

On 10 June 2020, Slater and Gordon filed a class action against CBA and Colonial (together, the Respondents) in the Federal Court of Australia on behalf of persons who held CCI for their CBA credit card or personal loan, namely:

The class action is based upon allegations that the Respondents:

In March 2018, following a review of their CCI products, CBA announced that they would end the sale of CreditCard Plus and Personal Loan Protection. It was identified that many CBA customers had been sold policies that they were ineligible to claim upon. CBA has provided refunds to some of their customers since that time.

Slater and Gordon believe that the CBA’s remediation program did not adequately compensate customers. The CBA CCI Class Action has been filed and seeks to ensure that all CBA CCI customers who suffered loss as a result of the bank’s wrongdoing are compensated.

Am I eligible to participate?

You may be a group member in the CBA CCI Class Action if, at any time since 1 January 2010, you were:

Group members who wish to participate in the proceeding

If you received an Opt Out and Commencement Notice, you may be a member of the CBA CCI Class Action and do not need to take any steps to remain a group member at this time.

However, if you wish to receive updates on the progress of the CBA CCI Class Action and be directly notified of any major developments in the claim, you can register your interest by completing the registration form. If you register, you will receive updates from Slater and Gordon using the contact details you provide.

If you do not wish to receive updates about the CBA CCI Class Action, you do not have to register and can choose to do nothing.

As a group member, whether you actively register or simply remain a group member by taking no further steps to remove yourself from the claim at this time, your individual claim will be resolved through the class action. You will be bound by the outcome in the class action. This means that you will not be able to bring your own separate claim against CBA and its insurers.

Will I have to pay legal fees if I participate?

I don't want to be part of the CBA CCI Class Action - what do I do?

The Federal Court of Australia made orders on 16 February 2021 requiring group members to take steps to remove themselves from the proceeding (known as “opting out”). The deadline to opt out was 4.00pm AEDT on 9 April 2021 (Opt Out Deadline), which has now passed.

If you chose to opt out of the proceeding, you are no longer a group member or part of the class action. This will mean that you will not be entitled to any benefit or compensation that may be obtained in the class action. However, you will still have the right to bring your own claim against CBA and its insurers if you wish to do so.

Complete the registration form to receive updates about the class action

For more information regarding the CBA CCI Class Action, please refer to the following documents:

We are here to help. Make an enquiry now.

If you have a question about the CBA CCI Class Action, or any other class action, make an enquiry now and our team will be in touch as soon as possible.